You know what it’s like with children. They can get ill on the day you’re about to travel.  The van – Phoebe – took ill the day before departure. The water pump packed up. Widnes Camping Caravanning Company to the rescue. Other camping and caravanning companies are no doubt available, but this lot were brilliant. A new water pump was fitted by 10am on the day we were setting off.

Thank you very much Widnes Caravan Centre. An excellent service. 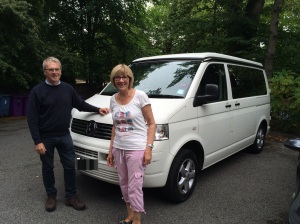 I’m writing today in the idyllic Averyon valley looking back over the past couple of weeks or so.   The trip meter is reading 1300 miles – most of them completed in Runcorn on this first day. No – that’s unfair – but the name ‘The Runcorn Expressway’ on that day was truly an oxymoron. Most drivers took well over an hour to travel 2 miles on this route which ironically we were taking to avoid the busy M6. I managed to escape the queue but then spent 40 mins trying to get out of Runcorn  by another route. Eventually I admitted defeat and went back over the Runcorn bridge to Widnes and essentially we started again. I’ve lived in Liverpool since College days and so know the area well but Runcorn has had the capacity to defeat me and, this time my Sat Nav, for more than four decades.

Slightly geeky, route type information coming up now. Starting again,  we took the M62 to the M6, over the Thelwall Viaduct. We did not take the M6, known affectionally by some as the Cheshire/Staffordshire free car park, but went for the M56. Waving at the stationary Runcorn Expressway traffic as we past, we were now zooming down the M56 heading for Chester. Stopped at Services for a coffee. Great! It’s all going very well. Travelling for an hour and a half and we’re half way to Chester! A journey that at night might take 30 mins? It’s 1969 all over again. Let’s camp in Nuneaton? Perhaps not.

However, all was good. The sun began to shine and we headed south. M56 to Chester. Then, fast dual carriageway to Wrexham, Oswestry, Shrewsbury, Kidderminster, Worcester, a bit of M5 then swerve around Swindon ( much like the one and only Preston North End had done a few weeks previously at Wembley – see earlier post).  We were soon entering into the gilded South of England. Marlborough – beautiful, undulating fields of wheat, a clear blue sky and a definite spring in Phoebe’s step. Phoebe is my van, Margaret is my sister in case there was any confusion.

Okay – a confession about the Phoebe thing. I confess, yes –  I did name my van. I know that is a potentially high-risk strategy. It could mark you out as being a slightly soft, nerdy type – perfect! Since I’ve only got 4 followers to the blog though, I don’t think it’s going to be a major issue.

Where were we – oh yes – Marlborough. Marlborough. Kate Middleton. Marlborough School. I like Kate – well you know, she seems a nice girl. It’s not her fault she’s joined the ruling aristocracy and will one day be Queen. Oh – perhaps it is her fault. Anyway – good luck to you Kate and your family. You seem pretty normal to me and ‘normal’ is good. I was once at a conference at Oxford University where 95% of the delegates were from the Independent sector. The teacher from Marlborough College looked, well, amazing in his multi coloured blazer and matching tie but he could have come from another planet than the world most of us occupy.  I am not judging, just saying, we undoubtedly do live in two nations when it comes to some aspects of education.

Apologies for the above paragraph. It will probably be edited out, if the blog had an editor other than me.

We left Marlborough behind along with my silent musings and by early evening were in Poole eating superb fish and chips overlooking Poole Harbour. A beautiful setting sun and bathing in its warmth marked the end of a good day; a satisfying day’s travel; a lovely day.

Tomorrow morning we leave for Cherbourg. No camping tonight. We stayed the night at Margaret’s son’s house in Poole. Nice one Nick. :-).

8 thoughts on “Runcorn to Rodez”